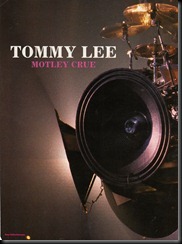 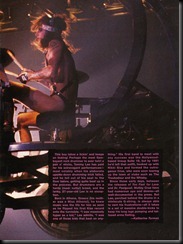 As far as awesome concert spectacles go Tommy Lee was not likely to top the spinning drum set stunt from the Crue’s 1987 tour. He sure came close though with the Dr. Feelgood drum solo of 1989-1990: on a track, suspended over the heads of the audience, Tommy & attached drum set would make their way around the arena while he played along with snatches of some of his favorite Rock songs.

The solo culminated with Tommy taking a long bungee jump off his drum set, dangling just above the audience. One night, a miscommunication with his roadie almost resulted in Mr. Lee cracking his noggin’ open like a cocoanut.
(from Chronological Crue)
‘7/4/90
At the end of his flying drum solo in New Haven, Connecticut, Tommy descends as usual on his bungee rope but has a feeling his roadie will not pull the brake on it in time. He panics and lets go of the rope to reach his foot strap, turning him upside down. When the rope’s brake is pulled on his twenty-foot plummet, Tommy’s head cracks into the head of a person in the audience, before he hits the ground head-first and blacks out. He gets taken to hospital for observation of his concussion, which not only signals the end of this show, but forces the cancellation of another show.’ 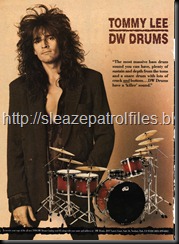 Just as the 1987 drum solo was featured in the video for ‘Wild Side,’ Motley made sure those of us who didn’t see them on their massive Dr. Feelgood tour at least got a peek of Tommy’s latest trick. 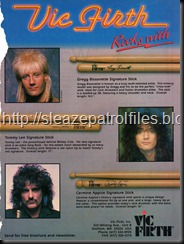 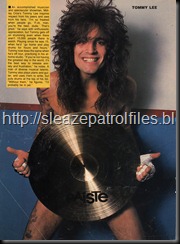 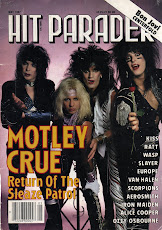 Welcome To the Sleaze Patrol Files

Go back to the dirty '80s and early '90s and experience the Crue during their Decade of Decadence through the pictures, articles and video of a vintage childhood Motley collection. Read classic interviews and articles about the Crue and view pin-ups and posters from Metal magazines like Circus, Hit Parader, Rip, Metal Edge, and Blast! as well as Rock pins, t-shirts, scrapbooks, records, trading cards and more. In 2022 celebrate 41 years of The Sleaze Patrol!

In 2020 THE SLEAZE PATROL FILES changed its direction from only featuring the childhood Crue collection of Mick Funz to also including WORLD OF MOTLEY CRUE posts. These posts will deal with subjects such as discographies, bootlegs and live performances and Motley Crue history and will include images that are not from Mick's collection. Many of these come from the world's leading Crue collectors and their often one-of-a-kind photos and memorabilia. Credit will be given to the original owners if that information is known. 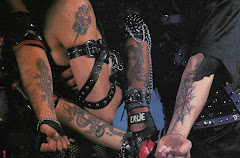 Use the SEARCH above at the top left of the page to find posts, articles, collectibles & images from all things Motley at the Sleaze Patrol Files Blog!

Motley Crue's photo sessions & live shots proved to have almost as much impact as their records. Although many of the pinups & posters featured at this blog have photo credits that can be seen by blowing up the image, not every one can be traced so here is a list of some of the many photographic artists whose work is featured at the Sleaze Patrol Files: 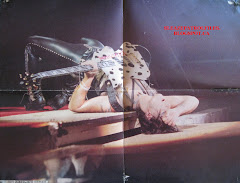 There would be no Sleaze Patrol Files without the following magazines: 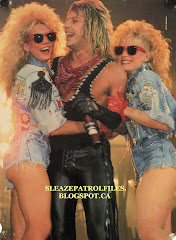 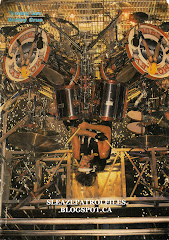 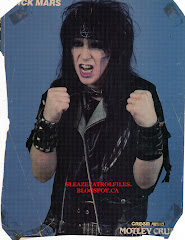 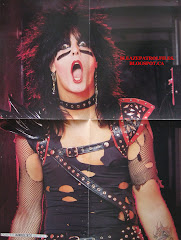